A customer called the Info desk because he needed receipts for meals purchased at the Grille District. Travelers Aid Volunteer Chas Carron tried calling Grille District but it rolled over to voice mail. He then called Airport Ops for an additional contact number. Ops gave him the cell number for Grille District manager, Daria Altenkova, and Chas left another message. He also emailed Travelers Aid staff with this information.

Staff contacted Ron Tranquill of Marketplace who in turn contacted Daria Altenkova of Grille District. Daria had received the message but there was no answer at the phone number for Sergeant Hawkins and there was no voice mail setup. Travelers Aid staff looked up the customer on LinkedIn and passed this information onto Ron Tranquill. Ron sent out a request on LinkedIn to try and connect with Sergeant Hawkins.

In the meantime, Daria of Grille District persisted with calling the Sergeant on the number he left with Travelers Aid. She was successful in contacting him and immediately began working on gathering the needed meal receipts. 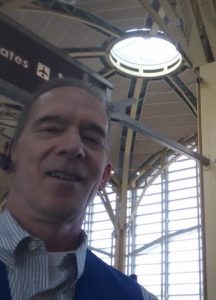 On Feb. 7, airport Volunteer Alan Davis was approached by Lt. Colonel Carattini at Info C for help retrieving his wallet from his American Airlines flight he just deplaned. The passenger ran up to the desk knowing time was of the essence to get his wallet from the seat back pocket on his flight as flights routinely do not sit at Reagan National. Alan grabbed the man’s boarding pass and immediately ran to the Center Pier checkpoint and out to Gate 25. Travelers Aid Staff was also at the desk that evening and watched with the passenger in dismay as the AA airplane pushed back from the gate. Lt. Colonel Carattini thought all hope was lost. Then, Alan was seen in National Hall waving the wallet and flashing the “V” for Victory sign. Alan told us the unbelievable details of his adventure.

When he arrived at gate 25, AA #576 to Dallas-Ft Worth was indeed pushing back from the gate. Alan spoke to the American Airline manager at the gate, Jeffrey Fontenot.  Jeffrey then called Dwayne Strong Jr who called the flight crew to inform them of the situation. Brenda Von Bergen, flight attendant, retrieved the wallet from the seat back pocket and provided it to the cockpit.  Captain Madden and First Officer Olenicak opened the side cockpit window and tossed the wallet down to AA ramp crew.  Dwayne Strong retrieved the wallet and provided it to Jeffrey Fontenot who took it back up the jet bridge and out to Alan in the Terminal. 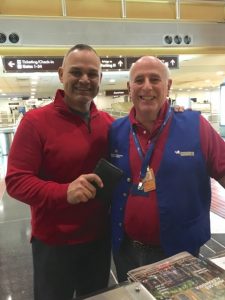 Travelers Aid Volunteer Carolyn Held received a phone call on Dec. 20 at Info C from a Frontier passenger. Mr. J. Moles was trying to locate his 3 pieces of missing baggage. Carolyn took the man’s phone number and information and walked to the Frontier ticket counter in Terminal A. The counter was very busy but the Frontier agent, Dumyl Henley, assured Carolyn that she would be right with her. Ms. Henley researched the passenger’s name and said she would take care of the situation. Carolyn used Frontier’s desk phone to call their passenger with the news. Ms. Henely then took the phone and spoke to the passenger. The agent immediately recognized this name and said the baggage had arrived and was being processed. Ms. Henley also told the passenger he could come in right away to pick up his luggage. Carolyn stated that this Frontier agent was extremely impressive.

A call came into the Info C desk on Dec. 15 from the daughter of an Iranian traveler who was stranded at gate 35X. The non-English speaking traveler’s American Airline flight to Toronto had been cancelled. Travelers Aid Volunteer Daphne Kamely received the call and reassured the daughter that she would personally head to the gate to find her 80-year-old mother. Very fortunately Daphne speaks Farsi. With the help of AA gate agents Daphne located the woman and communicated that her flight was not cancelled but delayed for 4 hours. The American Airline personnel said they would accompany the traveler to her gate at departure time. Daphne called the daughter to give her the information and to put her worries to rest. 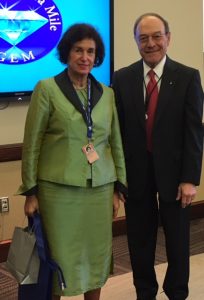