“I would like to take a quick moment to recognize Jeff Hayes for the outstanding service he supplied as I was traveling thru Washington DC. His pleasant attitude and attention to detail were outstanding. It is not often you receive good service from someone who is not looking for something in return. Mr. Hayes told me he was just doing his JOB and that was after offering him a tip which he politely refused. He is a rare gem in deed and I wanted to take this opportunity to recognize a JOB WELL DONE.
Thank You MR HAYES and may you impact others in the same positive light you shared with me.”

Ed volunteered 613 hours for Travelers Aid at Reagan during 2018. This is the second year that Ed has achieved top honors. In addition to his name being added to the permanent plaque, Ed received $50 which he will be donating to the Alzheimer’s Association in memory of his mother who died 10 years ago this week. 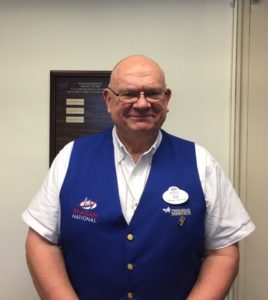 Hello,
Yesterday Rich at the Traveler’s Aid desk helped us find my son’s laptop that he left at the Page Restaurant.
Rich was extremely responsive to our needs and went out of his way to look for the laptop and hold it for my wife until she could come pick it up.
The laptop had all of his musical compositions and it would have been horrible to lose.
I just wanted to thank Rich for his help. Yesterday he made a big difference to us.
Thank you so very much,