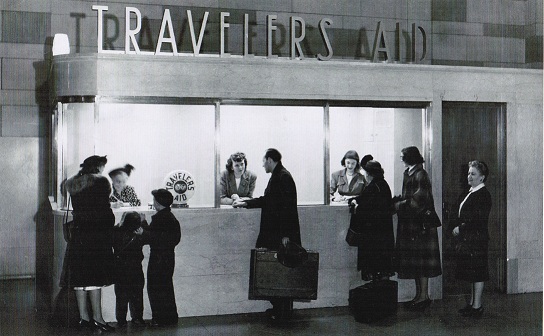 Network of support for travelers began 1851

The Travelers Aid Society of New York began in 1905 by a group of Jewish, Roman Catholic and Protestant woman organized by Grace Hoadley Dodge, a social welfare worker and philanthropist, as a non-sectarian organization with a sole purpose of protecting women travelers. In that first year, the organization worked out of Grand Central and Pennsylvania railroad stations as well as a one-room office on West 34 Street. In 1907 the organization was formally incorporated.

During the period of World War I, Travelers Aid assisted with influx of migrants traveling to New York from other parts of the country because of labor demands there and suffering local economies elsewhere. After the war, the agency assisted thousands of “war brides” and the returning servicemen. In 1921, Travelers Aid expands its services to include aid to the homeless and aged.

In 1923, Travelers Aid began sending some of its staff members to the New York School of Social Work for formal training. And, in 1925, it became one of the first organizations to provide psychiatric services to its clients.

During World War II, Travelers Aid, with the new USO, jointly operated exclusive servicemen lounges in the railroad stations. During the Korean War, it reopened a lounge in Penn Station.