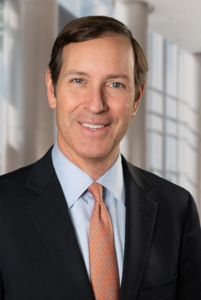 Dee O’Dell is a regional executive in U. S. Bank’s Consumer and Business Banking Group. He is responsible all retail branches and small business banking in the metropolitan markets in Ohio, Kentucky and Tennessee. In this region, U. S. Bank has approximately 300 branches in the cities of Cleveland, Columbus, Dayton, Cincinnati, Louisville and Nashville.

Dee has recently been named to this new role, building on an extensive banking career that has included experience in investment banking, corporate banking, capital markets, credit underwriting, and leadership at various levels.

He currently serves on the boards of the United Way of the Central Carolinas, the YMCA of Greater Charlotte, the Leading on Opportunity Council, and the Charlotte Mecklenburg Community Foundation.

He also serves as an advisor to Opportunity Insights and as a mentor with the Friedland Foundation. His previous service includes Heart Math Tutoring, The American Red Cross, The American Diabetes Association, and Habitat for Humanity.

Dee was born and raised in Oxford, Miss. He graduated from Hampden-Sydney College in Virginia and received an MBA from The University of North Carolina’s Kenan Flagler School of Business. He and his wife Christina have three teenage daughters.