Fulfilling Our Mission Amid COVID-19 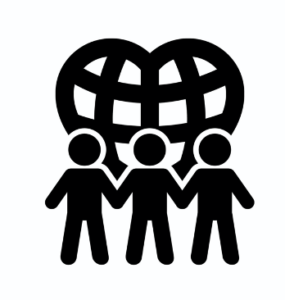 Sofia was desperate to find assistance for her two-year-old child when she called 2-1-1. The toddler was displaying disengaged behavior, fits of anger and bed wetting. Once Sofia felt more comfortable with the 2-1-1 contact center specialist, she admitted that the child was struggling with these issues after experiencing a sexual assault by a family member.

The specialist immediately suggested a follow-up call with the Crisis Center of Tampa Bay’s Child Development Infoline (CDI) to gauge if the trauma was impacting the child’s development. Sofia was incredibly relieved, since she had struggled to find a psychologist in the area who would perform an evaluation on her young child. CDI was able to provide Sofia with a list of resources to get her child back on track within her age group.

Sofia and the CDI specialist continued to work together, and Sofia eventually opened up about her own trauma from experiencing sexual abuse as a child. She shared the overwhelming frustration she felt at not being able to prevent her child’s assault. The CDI specialist had already referred Sofia to the Corbett Trauma Center for counseling for her daughter, and suggested that she would benefit from meeting with a counselor as well.

Sofia was so thankful to the CDI specialist that she sent the following message later that day: “Thanks for your passionate help today. It was greatly appreciated. It is a patient and kind voice like yours on the other end of the line that gives people like me hope and assurance that I have the help and resources I need.”
…to Assist Travelers 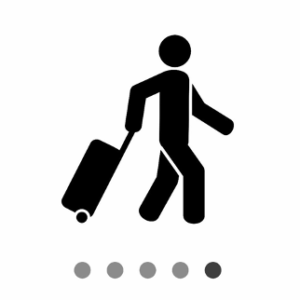 Staff at Travelers Aid Washington Union Station provided financial assistance to a man who had traveled to D.C. from Harlem, N.Y., to “outrun the spread of the Corona Virus.” A representative from a local hospital in D.C. had called on his behalf, describing the man as “very vulnerable,” since he apparently also had been robbed and had suffered a broken nose during an altercation. Treated for both mental and physical disabilities, he was deemed safe to travel. Travelers Aid verified his residence in Harlem and arranged for his return home via Greyhound. 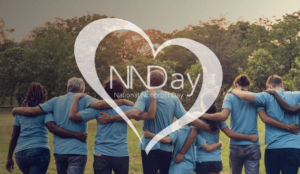 The Tariff Act of 1894, signed into law on August 17 that year, imposed the first federal income tax on corporations, which included exemptions for nonprofit organizations and charitable institutions. With a few modifications, nonprofit exemptions remain a solid part of the law today and have provided significant benefits, both for communities and the economy.

Sherita J. Herring, a renowned speaker, best-selling author and business strategist, was the driving force behind the establishment of National Nonprofit Day (NDD) in 2017, designed to educate, enlighten and empower others to make a difference, at the same time acknowledging those who are in the trenches, impacting lives every day.

For those of us who work in the social sector, NND is a time to gather your team and reflect on the experiences and sentiments that drive you to continue working toward your mission — being the change-makers of the world!

Shop for Good on NND!

Upward Transitions in Oklahoma City has joined forces with retail superstar Kendra Scott in a fundraising venture that will support UT’s mission to prevent homelessness, more important now than ever in these challenging times.

But hurry — it’s only a 24-hour window of opportunity!

From midnight on Monday, August 17, to 11:59 p.m. on Tuesday, August 18, use the code “GIVEBACK8304” online at Kendra Scott and Upward Transitions will receive a donation equal to 20 percent of your purchase price.

“We are so grateful to Kendra Scott for the company’s support of our mission on National Non-Profit Day,” said UT CEO Periann Pulliam (pictured above). “I never imagined I would see the world come to a screeching halt, but when it did, we knew our work to prevent homelessness would become even more important for the community.”

The company, based in Austin, Texas, has had a history of philanthropy since its founding in 2002. Kendra herself created a brand and culture that authentically values giving back and making a positive difference in the community. The Kendra Scott company maintains a focus on its customers and the causes close to their hearts, abiding by the mantra, “What Matters to You, Matters to Us.” 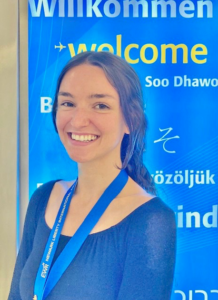 As a former AmeriCorps member, Lana shares a strong interest in helping others and in volunteer programs and is looking forward to meeting and working with all of you!

Lana grew up in New York’s Hudson Valley and loves to spend her time hiking and catching up on her favorite Hulu shows. Now closer to New York City, Lana is excited about exploring more of the city’s famous landmarks and great eateries! 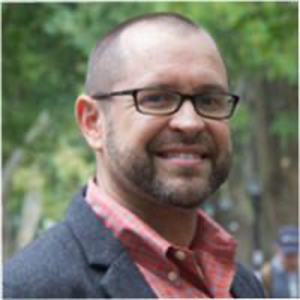 TAI, in light of our difficult decision to postpone the 2020 annual conference to May 12-14 next year due to COVID concerns, will kick off a series of virtual learning seminars on a variety of topics of relevance to our membership.

The initial presentation, scheduled for September 10, will feature Jason Miller, the CEO of Families Forward Philadelphia. Jason will lead us through a discussion on caring for yourself while caring for others. He will share thought-provoking lessons that speak to the height of self-care, not only during the current pandemic but at any given point in our lives. He also will outline guidelines we should follow in order to support and care for others even more effectively.

Future sessions will focus on human trafficking in our transportation centers, recruiting and retraining airport volunteers and race issues in your organization. A schedule of events and instructions for participating in the Zoom sessions will be sent to all members in the coming weeks. We welcome everyone’s participation! 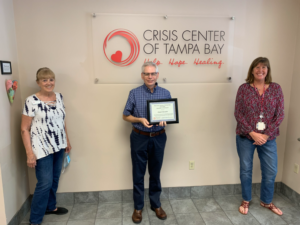 Among TAI volunteers worldwide, David Groeller might be considered “a rookie” — having served at Tampa International Airport for less than a year — but he is “the perfect example of an outstanding volunteer,” according to TAI Volunteer Coordinator Beverly Thompson (pictured with David and Clara Reynolds, CEO of the Crisis Center of Tampa Bay).

David was awarded Volunteer of the Month for April, even though the airport was forced to close its TAI booth at the airport in March. The photo above was taken on June 29, when the booth reopened, and David was the first one there to help. “It is so amazing when volunteers apply for Travelers Aid at the Crisis Center of Tampa Bay, wanting to give back to their community, and this is exactly what David has done from Day One,” Thompson said. “We knew immediately that he wouldn’t need much training, likely because of his background as a Human Resources specialist for the Hillsborough County government.”

When the airport booth closed down in March, TAI staff was assisting about 1,000 guests each week. The week of June 29, that number was only 208. “The way I look at it,” Thompson observed, “is that was 208 people who needed our help, so stand by and watch our numbers grow.” And David will be right there to lend a helping hand. . . . .as always. 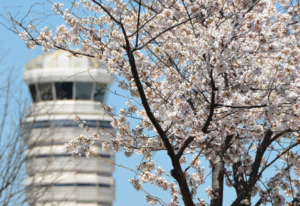 (This is a modified version of one in a series of posts in the blog “Stuck at the Airport,” by Harriett Baskas. This series highlights favorite features at airports around the country. Due to health concerns, some features and amenities at DCA may be temporarily unavailable.)

Ronald Reagan Washington National Airport (DCA), address-wise, is actually located in the commonwealth of Virginia, but it is just a 20-minute subway ride from the airport to the National Mall and all the free Smithsonian Institution museums. One of Travelers Aid’s 15 airport programs operates at DCA. 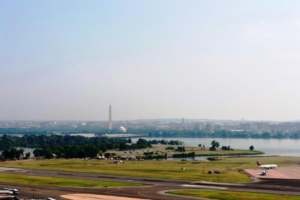 Aircraft approaching DCA from the west have a birds-eye view of some of the world’s most iconic landmarks, including the Washington Monument, U.S. Capitol and Lincoln Memorial. 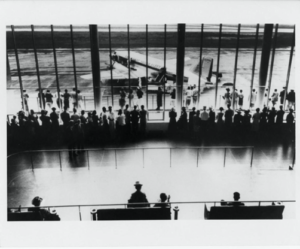 The airport opened on June 16, 1941, with service from two airlines, American and Eastern. The airport’s original name was Washington National Airport, but in 1998 Congress adopted the present name to honor President Ronald Reagan. 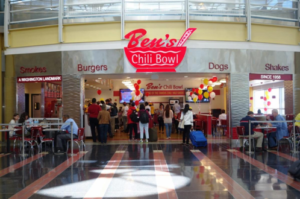 DCA has a branch of this landmark D.C. restaurant, established in 1958 by Ben and Virginia Ali. The eatery is famous for its chili dogs, half-smokes and milkshakes. 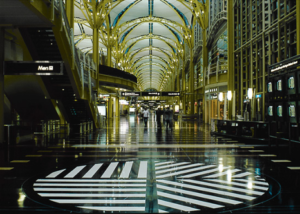 Art is an integral part of DCA’s Terminal B/C, which was designed by renowned architect Cesar Pelli.

#5 THE ROCKING CHAIR LOBBY IN TERMINAL A 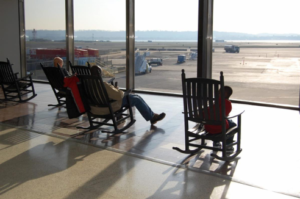 Who doesn’t love a rocking chair, even if it’s not on a front porch?

We Need Your News!

We are always on the lookout for interesting news about your organization!

E-mail ellen@travelersaid.org with any and all items you would like to be considered for the monthly TAI newsletter.

The “Travelers Aid” logo is a registered trademark of Travelers Aid International, Inc. 2020. All rights reserved.