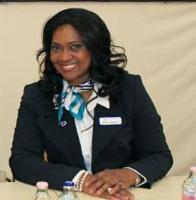 Donna Hubbard is employed as a flight attendant for a major commercial airline and is a survivor advocate and certified trainer in the fight against human trafficking with Airline Ambassadors International. Most recently, she assisted in the training of airline and airport personnel in anticipation of the January 2017 Super Bowl in Houston. Ordained in 1995, Pastor Donna Hubbard earned her B.S. in Theological Studies and an M.S. in Christian Counseling at PCIE Seminary Program, Los Angeles.

Hubbard was victimized by a pimp, trafficked and finally became gang property. Donna served a total of 10 years in and out of jails and prisons. Donnas’ commitment to serve God prompted her total and complete surrender to a greater destiny and purpose. Paroled in 1992 to Atlanta, she founded the Woman at the Well Transition Center: “Our Mission is to assist incarcerated, formerly incarcerated women and women and girls impacted by the criminal justice system, to regain their lives, their families and their dignity.”

The group provides training, counseling, and direct services to formerly incarcerated women and girls, including street intervention with trafficked girls and women, relapse prevention and employment readiness. Since 1994, Woman at the Well Transition Center has assisted more than 5,000 women and girls in pre-release, on-site and post-release programs.

Donna served as a consultant on Atlanta Mayor Kaseem Reed’s Working Committee to Reduce Prostitution and Sex Trafficking, and the National Office of Women’s Health addressing trauma impact on women.

She is an original organizer of the Atlanta Community Impact Project and directly responsible for creatively designing partnerships with Fulton Industrial Boulevard Community Court, Fulton County Office on Juvenile Justice, and the Georgia Department of Corrections.

She is the natural mother of 6 daughters and 1 son, 10 grandchildren and 8 great-grandchildren.