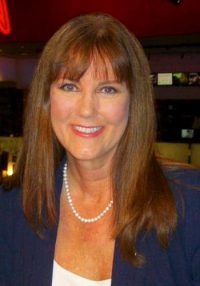 Nancy Rivard founded Airline Ambassadors International to provide for orphans and vulnerable children and relief to under-privileged communities around the world. Airline Ambassadors is the only non-profit leveraging connections with the airline industry to facilitate humanitarian efforts, and recognized by the U.S. Congress and the United Nations.

Prompted by the death of her father, Nancy left a management track with American Airlines to begin a profound search for meaning. She traveled the world and saw glaring inequities, between the developed and developing world and founded Airline Ambassadors to provide a way for individuals to match their unique interests and skills to actual world need. Since correctly identifying human trafficking on four flights in 2009, Airline Ambassadors developed the first “industry specific” training on human trafficking awareness that has been provided at 54 airports in the U.S. and around the world.

Nancy just retired as a flight attendant for American Airlines, and is now the executive director for Airline Ambassadors. Under her leadership, the group has hand-delivered over $60 million of aid to children in 62 countries in orphanages, clinics and remote communities. Members have positively impacted over 500,000 children, escorted over 1,000 children in need and trained over 5,000 front line travel industry personnel in human trafficking awareness.

She received the President’s Volunteer Service Award and Global Woman of the Year and dozens of awards since founding Airline Ambassadors including the Award for Visionary Leadership by New Friends New life in May 2017. Airline Ambassadors has been featured in 176 TV spots, 394 print and 73 radio features since inception.