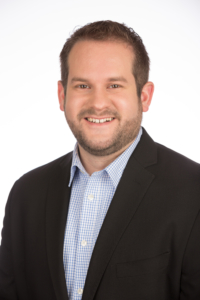 INNOVATION AND TRENDS IN CUSTOMER SERVICE

Scott Elmore joined ACI-NA in May 2014 as Vice President of Communications and Marketing. In this role, he is responsible for executing public relations efforts to advance legislative priorities and promote ACI-NA initiatives.

Prior to joining ACI-NA, Scott was Senior Director of Communications and Marketing for the American Apparel & Footwear Association, where he was responsible for developing and executing the association’s media relations and marketing efforts.

Scott has also served in the Office of the United States Trade Representative as a spokesman for Ambassador Susan C. Schwab on international trade and foreign policy issues. He also managed media strategy for the U.S. – China Joint Committee on Commerce and Trade and the Doha Round of trade negotiations at the World Trade Organization.

Elmore has led community outreach efforts with local businesses and organizations, including the Greater Orlando Aviation Authority, for Congressman Ric Keller in Orlando. Elmore earned his Master’s degree in Mass Communication from the University of Central Florida and his Bachelor’s degree in American Studies from Mount Vernon Nazarene University.