THE INCOME INEQUITIES GAP: THE IMPACT 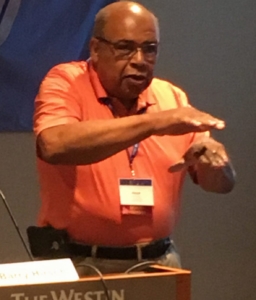 With a heart for social justice and a mind for strategic business management, Floyd Davis is celebrating his 15th year as president and CEO of Community Link.

Community Link has transformed through his visionary leadership from a local agency into a regional not-for-profit powerhouse that helps individuals and families obtain safe, decent, and affordable housing. Davis is widely respected as a role model in non-profit management who uses practices and insights from the business world to produce Community Link’s record of results. The agency placed 2,072 individuals in safe decent rental housing in 2016 alone. Since 2004 the agency has enable 3,111 families to become homeowners and since 2012 prevented foreclosure for 1,465 homeowners.

When Davis arrived at Community Link, it served Mecklenburg County and had one staff member in Cabarrus County. Today, the agency operates in 26 counties in the Carolinas. The number of grants awarded from the U.S. Department of Housing and Urban Development and other sources has grown dramatically during his tenure, allowing Community Link to serve veterans at risk of becoming homeless, women and children needing safe housing after domestic violence, and many others. The organization has also taken over housing programs from other local agencies, including the Latin American Coalition and Safe Alliance.

Davis’s proudest accomplishments include a program which provides free tax preparation for low-income taxpayers so that they may appropriately claim their earned income tax credit. The program was implemented in 2005 and has grown significantly. In 2016, Community Link helped 9,154 taxpayers complete their 2015 tax returns. The average refund was $1,600 – providing essential funds for housing and other necessities for individuals whose annual incomes average about $21,000 a year. This service is provided to the individual filer at absolutely no cost.

Floyd Davis discovered his life’s work early in his career. After graduating from Norfolk State University with a B.S. in accounting and business administration, he joined IBM and later became controller at Model Cities in Poughkeepsie, New York. Model Cities was devoted to helping citizens to revitalize their neighborhoods. He saw their joy at their successes and also came to realize his contributions would have the greatest impact in this field.

Over a career spanning 50 years, Davis has served as president and CEO of United Community Centers and Family Services in Fort Worth, Texas. Before that he devoted more than two decades to working in United Way executive positions in Minneapolis, New York City, Miami and Flint, Michigan. North Carolina benefitted from his expertise in the 1990s when he served as president and CPO of the United Way of Forsyth County in Winston-Salem.

From this extensive background, Davis came to realize how difficult it is for most people to figure out how to access and benefit from social services. As a result, he made one of his professional goals to change and improve the service delivery system for the individuals and families who depend upon it. That mission guides him still.

Floyd has been married to his wife, Ann, since 1976. They have two grown sons.