Clara Reynolds offers advice in a June 16 interview for parents to talk with their children after the Orlando shooting.

Promoting Your Agency as a Go-To Expert

In the early days of the Summer of 2016, Crisis Center of Tampa Bay has been in the news far more than any other Travelers Aid member. The agency worked to get its name and services out to the community, explains Ken Gibson, the director of marketing and public relations.

The Crisis Center operates the 2-1-1 confidential crisis assistance helpline in Florida’s Hillsborough County and has access to 4,600 other community resources beyond their own services. In addition to its extensive counseling services, Crisis Center operates the Travelers Aid booth at the Tampa International Airport and TransCare, the 9-1-1 basic response ambulance service for Tampa as well as medical transport services. With a staff of 200, Crisis Center provided assistance to 160,000 last year.

In the interest of assisting other Traveler Aid members to improve their media placements, Journeys asked Gibson to explain their operation and how they got more than 15 media mentions in just June and July.

As a pre-condition for any successful media outreach program, “it must have the buy-in” of the board and the agency’s top executives, he said. “Our board likes to see us in the news.” The support of the board and the CEO is crucial because flexibility is the key to getting on the air. An agency will need to “be flexible, drop things at a moment’s notice” in order to adapt to the reporter’s deadline schedule rather the reporter working around the agency’s calendar.

For a TV interview, Gibson said the agency gets about 2 hours notice. “They will call at 10 and need to have the interview completed by 2 to get on the 5 p.m. news.” The call from the inquiring reporter may come because of a news release or agency announcement or because the agency has developed a reputation as the go-to expert on a specific topic.

If a reporter sees the agency as a dependable source – meaning they will work with a station’s schedule and provide useful information – the reporter will return again and again for future stories, Gibson noted.

In the case of the Crisis Center, the agency has developed core strengths in handling emotional trauma in a crisis situation, sexual assaults, suicide prevention and family stabilization. It has the experts, and frequently CEO Clara Reynolds, a licensed social worker as well as holding an MBA, is the voice of the agency in press interviews. Gibson added that some staff members are fluent in Spanish and effective communicators with the region’s Spanish language media outlets.

Gibson noted that Crisis Center will turn down interview requests when the topic is beyond its core services. In those cases, the agency will recommend other, more appropriate agencies within the Tampa Bay community.

Crisis Center operates the 2-1-1 confidential crisis assistance helpline in the area and has access to 4,600 other community resources beyond their own services.

So just what made news in Tampa

The relatively light sentence of a Stanford University swimmer after a sexual assault trial and the sexual assault incidents on the Baylor University football team triggered either opinion columns or letters to the editor in the Tampa Bay Times which cited the work of Crisis Center in assisting sexual assault victims. And, a local TV station reached out to Reynolds for comment when a Florida trial court judge was sanctioned for her poor treatment of a domestic violence victim.

In the wake of the June 12 shooting at the Pulse nightclub in Orlando, where the assailant killed 49 and injured 53, the Crisis Center garnered 11 media mentions – either full interviews or news outlets used portions of an agency statement. While Orlando is a 90 minute drive from Tampa, Gibson said residents regularly travel back-and-forth between the two cities. There were Tampa residents who have gone to the Pulse, had relatives of club patrons or knew someone in Orlando impacted by the event. Gibson said that Crisis Center posted a statement on its website and on social media noting it had staff available around the clock to provide “emotional support” at 2-1-1.

The Pulse shooting was sandwiched between another high-profile Orlando shooting and the alligator attack at Disney World. The three incidents combined produced an air of secondary stress in the region creating new or heightened anxiety levels for some, especially children, Gibson explained. The Crisis Center’s advice to deal with secondary stress was featured on at least two telecasts.

At the Crisis Center Gibson is the only full-time staffer devoted to marketing and media outreach. Now in his third year, Gibson previously handled public relations for a small publicly traded company. “I did not set up the system; it was in place when I arrived.”

Reynolds arrived about a year ago and is fully supportive of the outreach efforts.

How to Boost Your Media Profile

Step 1 – Build a media contact list. Know the beat reporters, news editors, assignment editors who would cover your agency or the issues your agency tackles.

Step 3 – Armed with educational materials, make the time to visit the beat reporters, news editors and assignment editors to introduce and educate them about your agency’s programs. Visits should not be limited to traditional media outlets. Seek out relevant bloggers, e-news outlets or high-profile social media operatives. 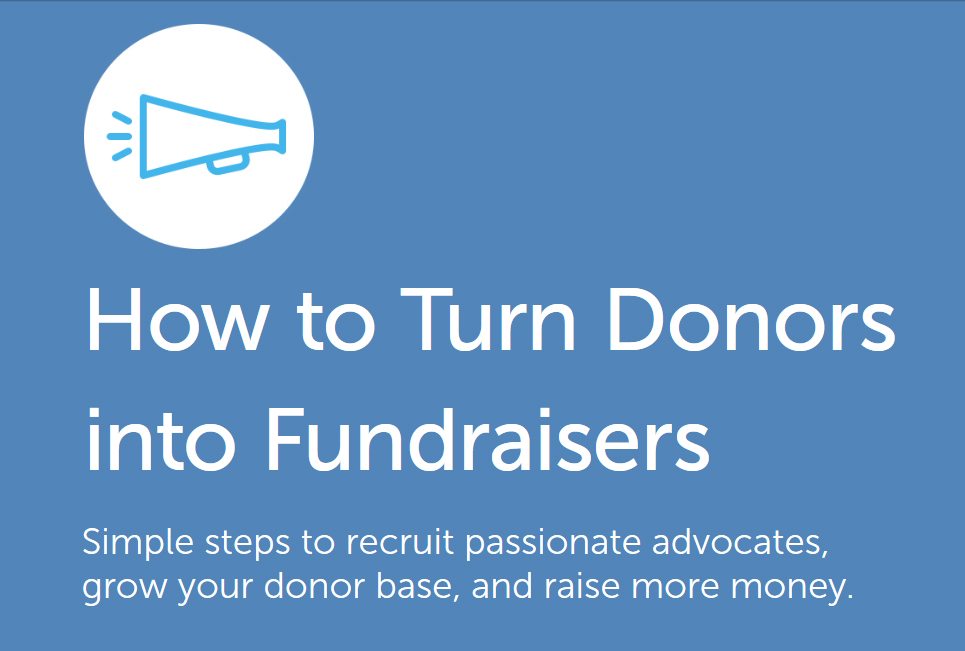 How to Tap Social Media to Reach New Donors

The Chronicle of Philanthropy in conjunction with the Network for Good reports that human service organizations earn more than any other organization from online donors – twice as much as educational groups.

This page is dedicated to exploring online giving – giving that goes by many names: crowdfunding, peer-to-peer fundraising and social fundraising. The National Council of Nonprofits notes crowdfunding refers to any effort to raise money with donations from a large number of people. Crowdfunding was first used by entrepreneurs as a way to attract small-sized investments to for-profit ventures, primarily via the internet.

The underlying theory behinds this form of online giving is to motivate your supporters to raise money from their network of friends for your organization.

Here is an ebook from Network for Good – How to Turn Donors into Fundraiser – that is a basic primer on peer-to-peer fundraising. Read it over and please offer your thoughts.

Information Sessions Help 3 Members
Reach Out to Their Communities

Community outreach is always a challenge for a nonprofit agency.

Three Travelers Aid members – Crisis Center of Tampa Bay, Homeless and Travelers Aid Society of Albany and Travellers Aid Australia – have developed outreach tools – “in-house tours” – that have set them apart from others.

The Crisis Center and HATAS both use a light meal accompanied by a presentation and discussion to reach community leaders. Travellers Aid Australia is now providing “training courses” to educate targeted communities about the transit system of Melbourne region as well as the services of Travellers Aid.

The Crisis Center offers a 1 hour light lunch twice a month that attracts 10 to 25 per session to acquaint the community with the services that the agency offers and its role within the community. Staff members are encouraged to invite interested individuals to lunch. Employees hand out a business card-size invitations that lists the date of the next session as well as information on the agency, explained Ken Gibson, the agency’s director of marketing and public relations.

The sessions are frequently the first introduction of the agency to potential volunteers. Gibson said many of the guests are “young retirees” new to Florida and the area who use the session as way to learn more about their new community.

The information sessions in Albany, dubbed HATAS @ Home, have evolved over the last eight years. The light breakfast is now offered the third Thursday, every other month. The next breakfast will be March 16. Originally, the sessions were every month.

The goal of the information session is to educate the community about HATAS’ services and the community’s homeless problems, said Liz Hitt, the agency’s executive director.

HATAS @ Home is now part of the community service curriculum of the Leadership Tech Valley, an annual leadership training program of the Capital Region Chamber of Commerce.

The sessions have produced board members, volunteers and donors, Hitt said. Three of the current 11 board members attended a breakfast session as part of the leadership program. This is a good way to tap and identify rising young or mid-career professionals.

Each session now attracts 7 to 12 and over the year about 30 attend. Most of the breakfast participants are now in the chamber program, Hitt notes, with a few drop-ins.

Both Tampa and Albany noted that donations are not actively sought during these information sessions.

Funded by a competitively-award grant from the Royal Auto Club of Victoria, Travellers Aid Australia provides a free community travel training course on how to use the transport systems in the state of Victoria. The course targets those with mobility challenges as well as those who are unfamiliar with the transit systems, primarily seniors and new community residents. The course also reassures travelers that the transit systems are safe and how to reach out to authorities, said Travellers Aid Australia CEO Elias Lebbos.

Not only does the classroom course show participants how to navigate the trains and buses, but also the services provided by Travellers Aid, especially services to help those with mobility issues.

The course has been offered since 51 times since it began 8 months ago and there have been 1,168 participants. It is custom-tailored to the needs of a specific group with a variety of modules so that the course is from 1 to 4 hours long. Lebbos said the agency brings the course to the interested participants.

Travellers Aid Australia spent 2 years developing the program, said Lebbos. There are similar programs in the region, including those offered by the transit agencies, but the “independent” standing and 100-year reputation of his agency has drawn participants.

The Auto Club is funding the program because as its members give up their cars they need assistance to become familiar with the trains and buses.